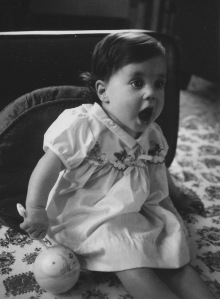 As I dug through the family albums to find pictures for Hatched in Newtown, it was fun to see pictures that I didn’t remember.  Had I seen the pictures before and forgotten them or had I uncovered them for the first time in my adult life?  There is no way to know for sure, but I enjoyed the thrill of discovery just the same.

When I met a long-time friend at Christmas time, she mentioned that she had some photos for me.  She was a teenager when I was born, and my mother was very friendly with her parents.

“I know that you don’t have some of them,” she said.  “A few are Polaroids.”  In other words, some of the pictures were taken with a technology that did not produce negatives, but rather instant snapshots on photo paper with a cardboard-like backing.

As I flipped through the snapshots, I recognized myself with dark brown eyes and dark brown hair that my mother had tied up in a bow.

Here I am with a hair style of my mother’s creation.

A few pictures later and I found the gem in the stack–a picture of my mother and me!  The picture was likely taken at my friend’s family’s summer cabin on Lake Sunapee in New Hampshire.  I am clearly starting to crawl and my mother is letting me explore the deck over the boat launch.  Her grip on me is apparent; she would never let me fall into the water.  What was my mother thinking on that summer day in 1968?  I’ll never know, but it was the greatest gift to be able to ponder the question.

Here I am at 11mos with my mother.

So many of us have pictures around the house with people in them who passed through our lives; sometimes as a frequent guest and sometimes as just a momentary visitor.  If those photos can ever be shared with their subjects, I’m sure they’ll enjoy reliving the memories like I did.