Pickles need to be squeezed–who knew?  Pickle makers, that’s who!  When I learned that my friend Carm was a pickler last Christmas, I let her know that I was anxious to learn if she wanted some help.  It’s now pickling season, so I was called to duty in exchange for a terrific lesson in the art of Carm’s famous bread & butter pickles!

STEP ONE:  Pick and wash cucumbers.   Don’t they look delicious?  Fresh from the garden!

STEP TWO: Cut the cucumbers into small slices.  Slices too big or too small must be rejected due to quality control and therefore eaten immediately!

STEP FOUR:  Add salt and mix thoroughly.  The salt draws the water out of the cucumbers. 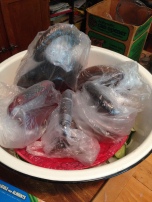 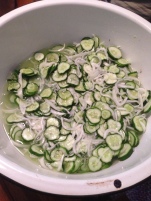 STEP FIVE:  To encourage the water to exit the cucumbers, we wrapped a tray in plastic wrap and placed it over the cucumber/onion/salt mixture.  We then loaded old-fashioned irons wrapped in plastic bags onto the tray to add about 7lbs of weight.  We stirred the mixture once an hour and removed the weight after three hours.  A LOT of water came out! 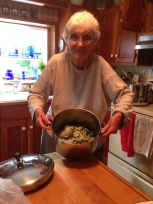 STEP SIX:  It’s time to squeeze the pickles!  Rudy, Carm’s neighbor, gets this honor each year.  The date and time are established with a phone call placed to Rudy by Carm.  “Rudy, come squeeze my pickles!”  Rudy grabs handfuls of the cucumber/onion/salt mixture in his hands and squeezes out as much water as he can.  Rudy is a good squeezer, and Carm says no one can do it better.

STEP SEVEN:  We mixed the brine with sugar, vinegar, tumeric, celery seed, cloves, all spice, garlic, and mustard seed.  Carm claims that the health food stores offer spices at more reasonable prices than the average grocery store.  We placed the mixture on the stove at a very low heat setting.  Carm says that it’s not good to boil brine.

STEP EIGHT:  We cleaned and sterilized all the jars and tops in boiling water.  The seals were purchased new since they can’t be reused from year-to-year.

STEP NINE:  We stirred the brine and kept turning the stove up until it was just about to boil.  Rudy scooped the squeezed pickle mixture into jars.

STEP TEN:  I filled up the jars with brine, leaving about 1/4″ space from the top of the jar.

STEP ELEVEN:  Carm wiped around the top of the jars so that we would get a good seal.  We screwed on the tops and then waited a few minutes before tightening again.  For some reason, there is always one more twist in the second tightening effort.  Carm said that I had a funny look on my face when I made my second twists.

STEP TWELVE:  The sealed jars were on display for a few minutes before the clean-up began.  The pickles won’t be ready to eat for a couple of weeks. 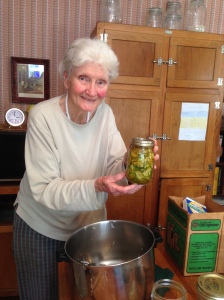 STEP THIRTEEN:  Carm displays the latest batch of her prized pickles.  She tried to take a picture of me, too.

I’m very thankful to Carm for letting me spend the day with her to make bread and butter pickles.  I know that they will be delicious!

STEP FOURTEEN:  Well, there had to be a step fourteen, because thirteen would be unlucky!  Carm emailed me after our adventure to say that we were supposed to have brought the brine to a boil WITH the cucumbers.  Oops!  Carm says that at 84 she can’t be expected to remember every step perfectly.